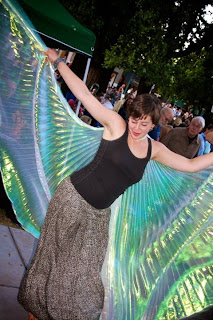 Hey all. The name's Erica - for now. You're probably here because you've either read the text of my high school graduation speech or seen the video on YouTube. Either way, thanks for tuning in to the World Wide Web, thus coupling your own internal operating system with the one that contains the giant brain of humanity. I'd now like to introduce this powerhouse, otherwise known as my friend, Internet. (applause and cheering)

Internet takes the podium. Well, it's an honor to be here, folks. But, really, it's all of you who should take the credit. It's you who made me who I am today. Without you, I'd be just some kind of untapped ether of information, only accessed by the few with extraordinary powers of the mind. So with that said, I'd like to thank every one of you for expressing, contributing, programming, interacting, feeding, reading, looping, sharing, indulging, writing, watching, uploading, downloading, searching, clicking, subscribing, editing, and following. Without users, I am empty. (more applause and cheering)

Thank you so much, Internet. We would now like to present you with the "Most Awesome Invention in All of Human History Award" of 2011.

Now, I'd like to talk a little bit about my relationship with Internet. She's really quite the gal. Without her, I wouldn't be here today. Who knows? I may also be empty. Her very being is how I got to this point, sitting here on my laptop in some seemingly random apartment building in Jersey, typing words into a travel blog entitled "America Via Erica." But when one traces the lineage of my actions, it isn't so random.

A new chapter unfolded after I stepped down from the podium on the 25th of June, 2010. I was free. No more school legally mandated by the State for me. I now could choose how, when, and where to educate myself.

The most important thing to me was the where. While college shopping, the only way I differentiated between the universities was by their locations. I was looking into big cities. George Washington University, Boston University, New York University, McGill, anywhere to get out of small-town Upstate New York. I wanted to experience new people, cultures, food, dance, and ideas. It was hard to do when surrounded by people of the same sheltered locale. However, in the last year of high school, I started attending Hudson Valley Community College in Troy, NY. I moved to Albany to live with some older friends of mine. Sure, it wasn't a big city...but it was big enough. I came back down to good ol' Greene County after a few months and began to appreciate the green much more than I had growing up. People weren't as important to me anymore once I found out that they mostly were about partying and material goods. Mostly, it didn't seem to matter where I went; as long as my friends had a TV, they were the TV. I decided to start hanging out with trees and animals much more.

Oh, and Internet. She was my homegal. We sure had some fun times, laughing and playing on YouTube and Grooveshark. But there were also a lot of serious times on Wikipedia and StumbleUpon. With Internet, I learned and grew. I became introduced to those new cultures and ideas that I had previously been seeking. Then, after the viral video, I became even more exposed. Now, I was meeting virtual people, who, using text, introduced themselves, congratulated me, and shared a small piece of their life via a link or picture.

With this, however, I began to appreciate people more, especially the tangible kind. How nice it is to touch, something Internet has yet to figure out.

I decided to take a semester at University at Buffalo so that I could at least dip my feet into the waters I was condemning. Beforehand, though, I had to seek an alternative. What would I do with myself without a college degree, but most importantly, without the years that would be devoted solely to exploring possible paths (albeit with some monotonous schoolwork, but all-expenses paid for by the rents)? The few weeks before the semester started, I headed down to Virginia to check out Acorn Community.

Acorn Community opened my eyes to new possibilities. I was now able to see a cooperative, rather than a competition, minimalism instead of materialism, and fulfillment instead of apathy. They told me there was no point in going to college because they knew I'd be back. But I still had to follow my own path, which would lead me to a motile adventure, full of insecurity, adaptability, and excitement.

You see, most people are content sitting in their living rooms that they've had for years, on their computers that stay on the same desk. Not me. My mission is to push the boundaries of space and time by covering as much ground in this universe as possible in one lifetime. Why, you may ask? Well, because, for me, routine and expectations make me weary. I need the stimulation of novelty for my operating system to function properly. Then, in turn, I can provide feedback to you, the reader, of my journeys, joys, jumps, and jabs. May you enjoy the input.